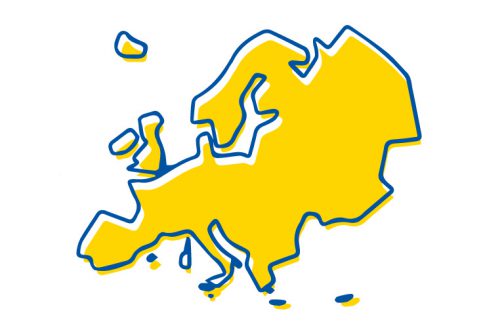 Maybe Europe will be all right in the end. Perhaps the little we can do within the structures of the EU will turn out to be just enough to steer us through these trying times. Maybe the realization that we indeed face an existential crisis will sink in quickly enough to respond to the challenges ahead.

But if we can agree that it is blatantly clear that the very core of Western society, down to what Robert F. Kennedy once called its “sacred rights,” is under threat, both indirectly from adverse global trends and directly through the challenge mounted by advancing autocratic nationalism – is “maybe” really good enough?

Both sides of the Atlantic are undergoing coordinated attacks on the structures and values that have upheld and sustained democratic civil society since the end of World War II. The usefulness of institutions built by the US during the Cold War era, mainly with the purpose of defending liberal democracy at home against the threat emanating from Soviet Russia, is increasingly being called into question. For Europeans it wouldn’t much matter why the Americans abandon their goal of securing the liberal order abroad. Perhaps they question its effectiveness, or have truly lost faith in the ideas they had so fervently championed over past decades – to the point where they, during their brief unipolar moment, even sought to cement this order in lands as far away as the Middle East.

Europe was often highly critical of the manner in which the US appeared to be running the world, and rightfully so. But at the same time we could always count on them continuing to do so.

Then came the true watershed moment of the post-war era. The 2008 financial crisis marked the end of the extended Cold War order. The consequences of the subsequent Great Recession and global realignment were even more pervasive than the events of September 11 or the peaceful revolutions of 1989. While the latter had allowed the US to retain its position as the only unchallenged global superpower, the events of 2008 served as a wakeup call. While the fall of Soviet Russia had meant merely the geographical extension of a previously established system, the financial crisis laid bare an uncomfortable new reality. The US facilitated globalization after the end of World War II and accounted for half of the world’s GDP by creating institutions and by helping Germany and Japan erect two of its major economic pillars. Its share today stands at just one-seventh.

With wages stagnating and income inequality rising, it has become harder to convince the citizens of Western societies, many of whom had not seen a pay raise in decades, of the benefits of global integration. In Europe, this situation was exacerbated by tough austerity measures, which had become necessary, in part, because eurozone countries had failed to include any kind of mechanism capable of squelching the fire in the event of a financial emergency.

Many of the changes we see today are structural and have been in the making for decades. Thus, some commentators have pointed out that we should prob­ably stop obsessing about the people who are cheering on this decline, the most prominent of whom currently occupies the Oval Office.

But even if Donald Trump and his ilk are only a part of this story, there is no denying that opponents of globalization have seized the moment.

They have crafted a highly effective narrative that juxtaposes a cultural and economic nationalism – slightly rebranded as “the new thing” – with an outdated world order buoyed by corrupt elites and propagated by obsolete values.

The ever-greater visibility of the European nation states’ failure to face the challenges of the 21st century has created an opening for anti-democratic and authoritarian forces, who have long begun presenting their audiences with a story where the weakness of the executive is a direct result of the implementation of the core values of Western democracies. Free trade, liberalism, tolerance and solidarity are sold, above all, by the political right but also increasingly by the left, as the root causes of establishment politicians’ ineptitude.

An oft-cited passage from Milton Friedman from 1962 aptly describes the situation in which we find ourselves today:

Only a crisis – actual or perceived – produces real change. When that crisis occurs, the actions that are taken depend on the ideas that are lying around. That, I believe, is our basic func­tion: to develop alternatives to existing policies, to keep them alive and available until the politically impossible becomes politically inevitable.

It is in part the failure of liberal elites, who had bought wholesale the notion of the end of history, that there were no other, more convincing ideas lying around when reactionary nationalism reared its head once again.

As stale as the ideas hawked by Steve Bannon or Nigel Farage may be, there is a new, rather innovative dimension to their project. In an ironic twist, the nationalists have globalized themselves. This means that “the dream of Brexit isn’t just about winning in the United Kingdom,” according to Farage, “it’s winning in Catalonia, Hungary, Poland and all over the European Union as we speak.” Bannon, in the meantime is busy setting up his anti-EU operation in Brussels. It is with peril that we ignore, laugh at and dismiss these people and the very real rapport they enjoy with huge swaths of the European population. Anyone who hasn’t grasped this after Trump’s electoral victory and the Brexit vote is closing their eyes to reality.

The only way to stop the march of the enemies of democracy is to reclaim sovereignty. More than anything, Europe needs efficient and effective democratically legitimized government action. Only if the citizens of Europe realize that their political willpower can be translated into political authority – one that does not bow to external, superordinate powers – can democracy truly thrive on this continent. For many European nation states, this can no longer be achieved with the EU as it exists today. The uneasy feeling of being ruled rather than governed, which is shared by many Europeans, not only on the periphery but also at the center of the EU, is not fictive.

Sovereignty lies at the heart of the populist message. It’s the power to decide who makes the laws, who sets the rules and who is granted or denied the privilege of entry. This includes the government’s capacity to protect its citizens from harm, be it the threat of a foreign adversary or of social decline. Neither the EU nor European nation states can currently claim they will be able to deliver on these basic government functions, even in the near future. In many countries the capacity to do so has already been lost.

While the nationalists are right to lament the absence of sovereignty, or power, as some might prefer to call it, their romantic descriptions of past glory vastly overestimate the extent to which it ever existed in the first place.

Europe was never able to uphold the structures by which it traded with the world, managed flows of migration or capital, and defended its borders independently from the US. To this day, NATO actually defends the fact that most of its war-fighting capacity originates from across the Atlantic.

While there is a common travel area – Schengen – there is no common border defense or migration policy. The resulting lack of both clarity and capacity led to predictable problems both on the eastern flank and in the Mediterranean once the EU was seriously put to the test by two simultaneous crises: a large scale influx of refugees and repeated Russian aggression.

The EU was never apt at combining the continents numerical resources. At its inception, the EU’s goal was to fulfill three basic functions: Contain Germany, keep out Russia and facilitate continuous US involvement in the continent’s affairs.

French President Emmanuel Macron’s proposal to return sovereignty and democratic participation to the continent’s citizenry through the creation of a larger “European sovereignty” is at present the only concrete suggestion for EU reform that has the potential to accomplish what needs to be done. It remains doubtful that he will succeed with his plan given the political realities of a system dominated by the logic of ever-competing nation states. The pregnant question: What happens if Macron fails?

Apart from the obvious geo-strategic implications and the unresolved currency crisis, failure to regain political power and the related capacity to distribute resources strategically could be particularly disastrous given the looming technological change in the periphery of the eurozone. Automation and digitization have already begun their triumphant advance. At the very moment when investment in the infrastructure of the future economy should occur, the wheel of history is at a standstill in Europe. National budgets of many eurozone countries will remain inflexible for years to come; there is also a shortage of investment, which will be difficult to make up for in the future. As the influx of private capital is disproportionately small, the danger of a “lost generation” looms in southern Europe. As long as there is no substantial change in the capacity and direction of eurozone governance, the prospect of a perpetually unstable political and economic region around the Mediterranean becomes more and more likely.

We must wish Macron well, but we must also prepare for the eventuality of his program being rejected. We need a Plan B.

Should nation states and the EU prove incapable of meaningful reform, this leaves only a bottom-up approach aimed at regional actors across the continent that follows a Europe-wide coordinated strategy to push for the minimum requirements of reform. These efforts must be carried out by European citizens acting in the interest of the entire continent and, if necessary, against the interests of individual nation states. Europeans feel most at home at a subnational or regional level, yet this is precisely where revisionist nationalism is felt most violently. It is thus here that the campaign to reconstitute European sovereignty should begin.

A limited set of demands used as a litmus test for regional candidates of all parties could include six items to guarantee sufficient room for maneuver – so that the future of political and social developments of the EU remains malleable – while taking into account the historical precedents of politically stable entities:

The construction of such a coalition is a tedious and adversarial task. However, should Macron be unable to deliver on his plan, it is the only alternative for a truly democratic, transparent and efficient Europe. Without such efforts, all that remains is the gloomy perspective of a continent left behind.

Benjamin Zeeb
is CEO of the think tank Project for Democratic Union. 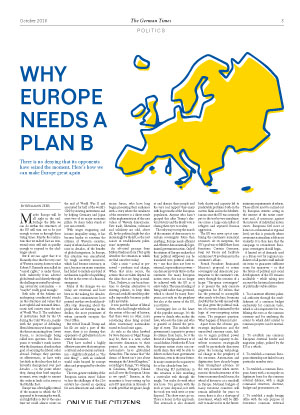