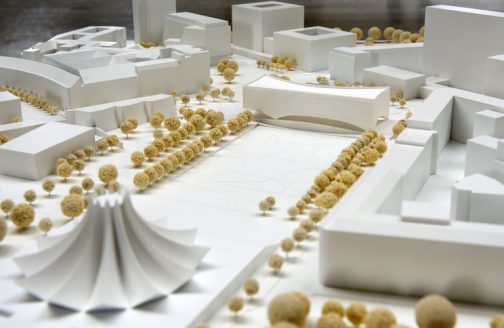 If at all, most non-Berliners are familiar with the Anhalter Bahnhof train station from reading the works of Walter Benjamin, Paul Celan and Erich Kästner. And Berliners themselves most likely assume that the small yet monumental portal next to the soccer field near Askanischer Platz in Kreuzberg is some kind of decorative addendum to the park rather than a remnant of what once was a major railroad terminal.

This state of affairs is sure to change in the next couple of years, as construction progresses on the new Exile Museum to be located behind the free-standing portico. The museum will commemorate the experience of individuals forced to flee Germany and all the areas eventually occupied by the Nazis between 1933 and 1945, people who would go on to build new lives in the Soviet Union, Czechoslovakia, Austria, the US, France, the UK, the Netherlands, Scandinavia, Africa, China and other countries.

The architectural competition held to find a winning design for the museum recently came to a close with top honors going to the Danish architectural firm of Dorte Mandrup. Second prize went to a striking design from the New York-based office of Diller Scofidio + Renfro, whose proposed structure stands out for its efficient, highly flexible floor plans and large glass cubes; they were also the only designers to incorporate an ecological agenda into their design.

Though grand and forward-looking, Diller Scofidio + Renfro’s design fails to evoke reflection and meditation as a memorial. Instead, it is a cheerful structure that chooses to focus on the positive experience of the US as a country that became home to many exiles. But the organizers behind the Exile Museum in Germany obviously also want their new building to exude a sense of contemplative dignity that acknowledges the great loss that came with exile and flight.

Third prize went to the Berlin-based office of Bruno Fioretti Marquez, whose submission drew on the same sparse, ascetic monumentality used so often since the 1960s in so-called memorial architecture. Their design made use of the portico as an actual portal again, that is, as a means through which to enter into a massive brick building and solemn entrance hall, which stands in sharp contrast to the otherwise open floor plan that can accommodate almost any spatial size and shape.

In their winning design, the team at Dorte Mandrup opted for the middle ground between a meditative “building of remembrance” and an open museum. The portico is indeed staged as a stand-alone memorial, with the new building receding behind it in a wide circle segment, thereby opening up a small square space between old and new. Each ground-floor façade comprises one hyper-wide and gradually curved arch that bears the weight of a massive brick wall and a horizontal grid of narrow window slits.

The impression made by the interior, however, will be neither bulky nor heavy, but rather dynamic and fluid, thanks to the interaction of the curved brick floor with the counter-directional sloping lines of the arched window walls.

This design scheme dovetails with the building’s dual functions. The district of Friedrichshain-Kreuzberg has made the valuable urban property available to the museum on the condition that the much-used sports fields on the grounds of the former train station will remain in full operation and that the facilities adjunct to the fields will be housed in the base of the museum. The current design does not foresee any direct access from the sports fields to the café, even though it is meant to be the interface between the museum and the external world; but this can be easily changed.

Unfortunately, we cannot yet determine whether the plans submitted by the other architects invited to take part in the competition offered any better solutions; the organizers behind the Exile Museum have assumed the bad habit of first presenting only the three top competition winners. This means that the designs submitted by other contenders, which include Francis Kéré Architecture (Berlin), Nieto Sobejano Architectos (Madrid/Berlin), SANAA (Tokyo), Sauerbruch Hutton (Berlin), Staab Architekten (Berlin), URBANA (Dhaka) and Zhang Ke standardarchitecture (Beijing), won’t be made public until later in the fall. It should be noted that along with the winners, these firms participated largely for the honor of doing so. Indeed, the €27 million construction budget is hardly a promise of hefty profit.

In fact, the museum is the pro-duct of a citizens’ initiative, and despite the project’s big-name patrons, which include Joachim Gauck, the former president of Germany, and Herta Müller, recipient of the 2009 Nobel Prize for Literature, neither the Berlin Senate nor the federal government have jumped on board so far. The individual who made it all happen is the owner of the Villa Grisebach auction house, Bernd Schulz, who sold off a number of objects from his private art collection to gather the €6 million necessary to get the project underway.

This genesis is especially shocking when weighed against the substantial amount of government funds being pumped into the Flucht Vertreibung Versöhnung (Escape, Expulsion, Reconciliation) documentation center scheduled for construction across the street. This facility on Askanischer Platz will focus on the fate of the 12 million German-speaking people who were forced to leave their homes in Central and Eastern Europe after 1945. But the fact remains that their expulsion is directly rooted in the flight that began in 1933, when the Nazis seized the reigns of the government. Germany has lacked a museum devoted to this narrative, in spite of an outstanding array of collections addressing the matter. The Exile Museum will fill this void.

And yet, the museum’s focus on individuals, such as the Mann family, Walter Gropius, Willy Brandt and Marlene Dietrich, blurs the fact that the vast majority of exiles were by no means great politicians, engineers, writers and actors. This exclusionary approach is conveyed in the museum’s founding documents, which further neglect the research findings that more than 90 percent of art historians and architects, for example, were not permitted to carry out their profession. Exile has always been much more a matter of reinventing one’s own life or the failure to do so, rather than something heroic. This sort of exile, and certainly not an inner exile, can be depicted only if the museum weaves sociological and historical methods into its approach.

Even more problematic is the exclusive focus on the German-language exile of the 1930s and 1940s. An exceptional 1997 exhibition at the Neue Nationalgalerie in Berlin already showed that it’s simply not possible to separate German exile from European exile. To clearly demonstrate that the trauma of escaping the Nazis is not limited to Germans per se, the Exile Museum must also highlight the experiences of Czechs, Hungarians, Poles, Estonians, Bulgarians, Lithuanians, Romanians and Latvians, but above all Russians. Indeed, countless individuals of various nationalities escaped from Russian and Chinese emperors, from Mussolini and Franco, Stalin and Mao, from the socialist regimes of the post-war era, from African and South American dictatorships. Together, they embody the massive historical gray zone that is exile. After all, while the GDR – some of whose founders were returning exiles themselves – gave Chilean exiles a home, they simultaneously drove hundreds of thousands of their own citizens into exile.

Nikolaus Bernau
is a journalist, critic and historian specializing in architecture and the history of museums. 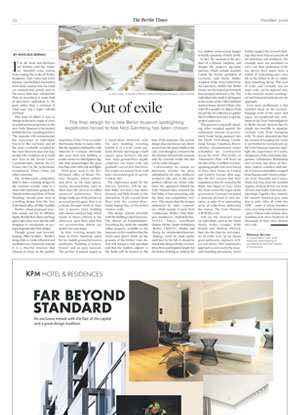