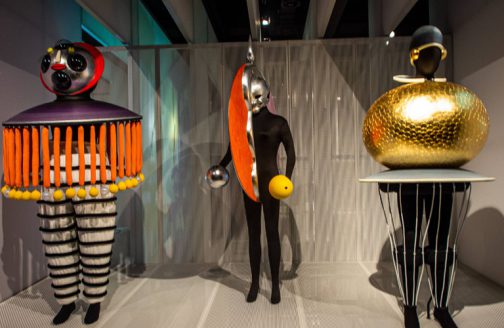 The small Saxony-Anhalt city of Dessau hasn’t always had it easy. During World War II, an aircraft and vehicle factory located here drew 20 devastating Allied air raids on this city, after which barely one stone was left untouched. Builders in the GDR cleared more space in what remained of the town to build a model socialist city, and after the official demise of East Germany in 1990, profiteers hurriedly filled any remaining vacant lots with hideous shopping malls. The city center can now at best be appreciated as an unseemly panopticon of architectural aberrations.

For decades, however, most who visit the city have headed straight for its northern edge, as it is home to one of the most famous places of pilgrimage for fans of architecture and design from all over the world: the Bauhaus Building (1926) by Walter Gropius and the Masters’ Houses also designed by Gropius, which provided housing for Bauhaus instructors and were intended to showcase model homes for modern living. In 1926, the epoch-making art, design and architecture school moved to Dessau from Weimar. For architecture historians, this ensemble of buildings, carefully restored in recent decades, encapsulates the singular nucleus of contemporary architecture. Many of the features that are now part of the architect’s standard repertoire – extensively glazed facades, open floor plans, functional kitchens and flat roofs – had their origins here in Dessau.

To mark the 100th anniversary of the founding of the Bauhaus in 1919, the city of Dessau (like Weimar before it) has received its own museum as a birthday gift from the German government. Dessau seized this opportunity by choosing a space in the city center for the new building, which stands between a park and a pedestrian zone, so that a bit of Bauhaus glamor would reflect on the long-ravaged inner city. While not a bad strategy, the result is fairly disenchanting.

It’s hard to admit, but the outside of the new Bauhaus Museum in Dessau has all the charm of a faceless exhibition hall you would expect to see at any trade fair site in the world. Its long cuboid form crouches between the architectural eyesores of the GDR and the post-Wall era, looking a bit like a temporary pavilion where new cars or a fashion collection would be on display. The young Spanish designers at the Barcelona-based Addenda Architects had a budget of just €30 million, and it shows. Almost every detail reveals the project’s financial constraints – this is no masterpiece.

The entire ground floor consists of a single hall, as it was designed to be a forum for future exhibitions as well as educational and training events. Depending on light conditions, its extensively glazed facade allows people to see out from the inside or in from the outside, an intentional transparency designed to minimize the effect of the museum building obstructing views between the inner city and the park.

But does it work? Being in the hall in the daytime feels a bit like being in an aquarium, in a diffuse weightlessness completely cut off from the noise of the city, yet distracted by the traffic, the passersby outside and the possibility of being under their constant gaze.

A museum is first and foremost a place for exhibiting things. With this in mind, the architects topped two staircases with a gigantic black box, a type of windowless concrete tank that spans the ground floor hall like a bridge. This provides a space where the Bauhaus Dessau Foundation collection can finally be appropriately presented. The collection comprises roughly 49,000 objects, making it the second-largest fund of resources – after the Bauhaus Archive in Berlin – covering the history of the art and architecture school. The team of curators deliberately focused not on the later myths surrounding Bauhaus, but on its everyday teaching activities. The exhibition is titled “Versuchsstätte Bauhaus” (Bauhaus – an experimental institution), suggesting that it’s less about the objects than about creative processes, ideas and inspiration.

The exhibition first confronts visitors with a number of questions that echo the artistic and technical visions of the early 1920s. Can a person be modeled? Can you sit on a column of air? Can light also be form? These were the questions, posed in the spirit of the time, that inspired the Bauhaus staff, students and followers to try out new, unusual and sometimes seemingly crazy ways of approaching art, design and architecture, to break with conventions and to experiment with colors, shapes and spaces. Not everyone liked it. Many people in Dessau regarded the innovative school and its highly permissive teaching methods with suspicion, while some were openly hostile. The dawn of this “new era” was more than suspect to many of the city’s middle-class inhabitants.

The vast black-box hall is above all dedicated to the school’s unique teacher-student relationships. The artist Paul Klee bequeathed to his student Gunta Stölzl “fundamental insights into the laws of form” to inspire her textile designs in the weaving workshop, and some of her design work shows how she tried to explore surfaces, forms and spaces on the basis of Klee’s ideas. The various teacher-student couplings are exemplary of Bauhaus methodology, its teachers’ approaches and the ways in which the students were encouraged to be independent in forging their own artistic paths.

A long, orange bar somewhat resembling warehouse shelving divides the space and provides the surfaces and volumes for presenting the creative work of Bauhaus students and instructors. These objects span the full range of functional design, from lamps and furniture to plans for apartments, buildings and entire neighborhoods.

Dessau now has its long-awaited Bauhaus Museum. The new building in Weimar has become a magnet for visitors within just a few months. Let’s hope this unremarkable box of a museum will ultimately become a treasure chest for Dessau. 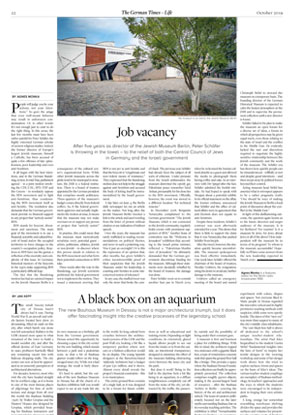