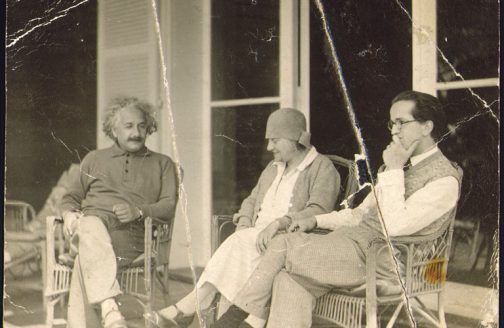 In his pursuit to impress the great physicist Albert Einstein, Konrad Wachsmann resolved to put on an extraordinary performance. As chief architect at the construction firm of Christoph & Unmack, which specialized in manufacturing timber buildings, Wachsmann borrowed the fancy limousine and driver of the firm’s director and set off from the small Saxon town of Niesky. It was the spring of 1929 and Wachsmann was headed to the village of Caputh near Potsdam, half an hour outside Berlin, where the Einsteins were looking to build a timber summer home directly on Lake Templin.

The young, ambitious architect was fully aware that his opportunity had come, and he pitched his design to Einstein and his wife with a great deal of vim and vigor. Although his audacious masquerade was soon exposed, the Einsteins took pleasure in the ideas of this brash young man. Wachsmann got the contract and ended up designing the couple’s modest yet picturesque wooden house, which was to become a beloved summer retreat for Einstein and his family until they left Germany for good in 1932.

For Wachsmann, what began in Caputh was not only a lifelong friendship with Einstein; he also gained independence as an architect and would go on to work in many major cities across the world. In retrospect, however, the almost four years he spent in Saxon seclusion proved to be the most formative phase in his professional life. In early 1926, the then-destitute university graduate had made his way to Christoph & Unmack in Niesky upon the suggestion of his teacher and mentor, the renowned architect Hans Poelzig. Upon arriving at the firm, Wachsmann had no tangible plan other than to stay for four weeks and eat as much as he could.

Contrary to his expectations, the barely 25-year-old architect did not find himself in the clutches of rural tristesse; he instead felt immersed in a world of fascination. In the huge production halls of Christoph & Unmack, timber buildings were being industrially fabricated and produced in series. From that moment on, Wachsmann became an enthusiastic supporter of rational and standardized construction methods and spent day and night in the workshops. He delved with increasing dash into the innovative methods of building wooden houses with prefabricated parts in economical and yet varied ways. This architectural approach would carry him through his entire professional career.

In Niesky, Wachsmann quickly worked his way up from a simple constructor to chief architect. And it was in this function that he created the Direktorenhaus (director’s residence) for Christoph & Unmack in 1927. With its modern, Bauhaus-inspired formal language, the structure is considered an outstanding example of industrialized prefabricated construction to this day.

Wachsmann’s highly functional Blockhaus has a clean cubic structure with dividing walls that are inserted through grooves in the outer walls. This gives the façade a taut, almost skin-like character. Yet another new feature was the possibility to vary the rooms on the ground floor by means of sliding doors. The construction was technically precise down to the smallest detail and also tailored to serial prefabrication.

Wachsmann was of Jewish origin and, after the Nazis came to power, made the wise decision not to return to Germany from his study abroad in Rome. He was eventually interned in France and ultimately managed to emigrate to the United States thanks to the intercession of his father figure and friend, Albert Einstein.

As soon as he arrived in the US, he joined with Walter Gropius – the founding director of the legendary Bauhaus School and himself a refugee from Germany – to found the General Panel Corporation. The company advertised their business by declaring that pre-fab wooden houses could be transported anywhere on the back of a single truck and assembled on-site in nine hours without the workers having to get their fingers dirty.

Although the company started off successfully, Gropius and Wachsmann ended up losing money and had to give up their business in the early 1950s. Needless to say, visionary architects are not always good businessmen.

As a university professor and scientist, however, Wachsmann went on to great international renown. The idea of the universal usability of individual components drove his theoretical considerations throughout his entire life. Among other innovations, he developed the “Wachsmann knot,” an ingenious fastening system consisting of different wooden elements that can be used in almost any construction. Wachsmann also became famous for the concept of “teamwork” in architecture. According to his theory, the full team of experts shared responsibility for each building they made – a revolutionary suggestion in the 1950s and 1960s.

Wachsmann returned to his home country of Germany in 1978, just two years before his death. He was officially invited to act as an expert on the restoration of Einstein’s summer house in Caputh, which at the time lay behind the Iron Curtain in East Germany.

The 78-year-old took the opportunity to visit a number of sites from his childhood and early years as a professional. He was particularly drawn to his native city of Frankfurt (Oder). In spite of his many years abroad, he still saw the city – which had become a border town to Poland after World War II – as his home. In a final act of reconciliation, he requested that he be buried there.

At the time, the wooden house Wachsmann had built in Niesky was still the district office of the local socialist youth organization known as the Free German Youth (FDJ). The house was only listed as an historical monument in 1983 after American architectural connoisseurs called attention to the importance of the structure. After the collapse of East Germany in 1989, it took 25 years before the house could be restored to its original splendor and re-opened as a museum. Since that day, the building at the southeastern tip of Saxony has attracted over 10,000 guests annually, including many groups of young architecture students from all over the world, who visit the site as a way of locating the beginnings of Wachsmann’s theoretical cosmos.

Wachsmann once summed up the importance of his early years in the following way: “Everything that came after that, everything that took place in Berlin, New York, Tokyo, Chicago, London, Moscow, Paris, Rome, Zurich and Warsaw, it all began in the Moravian Church village of Niesky. In that timber house factory, I discovered the path that led me to a turning point in building.” 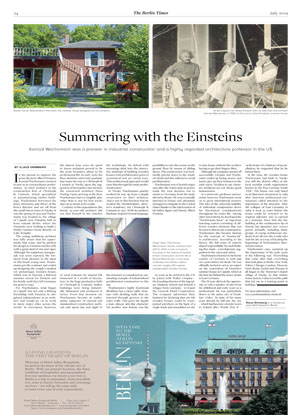