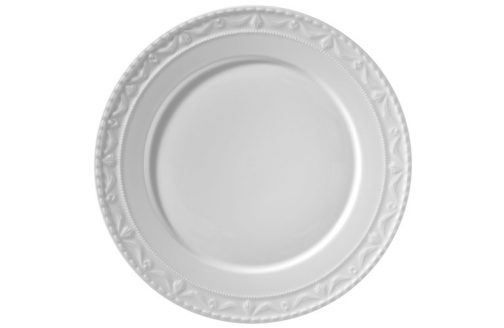 A KPM icon for the ages: a plate from the Kurland line, available since 1790.
Credit: KPM

There are certain things in life we should probably refrain from doing, but we do them anyway. Almost 15 years ago and under constant advisement to let it rest, Jörg Woltmann remained undeterred in pursuing his business idea: “It has to be saved.” And so Woltmann, a banker by trade, paid €13.5 million and invested a further €30 million to rescue one of Berlin’s most historical cultural assets, the Royal Porcelain Manufactory, or KPM. Founded in 1763 by Frederick the Great and, until 1918, owned by seven different kings and kaisers, the KPM was teetering on the edge of bankruptcy in 2006, when Woltmann made his move. It wasn’t just a “sense of patriotism” that prompted the purchase, Woltmann was also entirely convinced “that I could do it.” It turned out he was right, and in 2007, he was named Berlin Entrepreneur of the Year for his efforts. Several years later, in 2015, he was also honored with the Order of Merit of the State of Berlin.

Every morning since, Woltmann has taken care of business at the premises of the KPM manufactory on the edge of the Tiergarten, with afternoons reserved for his other business interests. Amid the wood-clad walls and English antiques in his office, a portrait of Frederick the Great – “Old Fritz” – tracks his every move, as he explains his original motivation for buying the manufactory. His goal was to preserve a storied tradition and safeguard the fine art of craftsmanship and time-honored design, he says. But Woltmann also sought to preserve collective memory and foster a common experience, which is why he also built an interactive exhibition space next to the production facilities along with a hands-on, do-it-yourself manufactory.

Woltmann’s greatest wish is that people rediscover the pleasure of a well-set table, maybe even that young people will recognize the value of handcrafted products and perhaps understand why a Kurland cup and saucer from KPM are more expensive than a mug from IKEA. It takes almost three weeks and a process involving roughly 29 steps and 25 different workers to make the Kurland, and each cup and saucer undergoes 10 quality controls before earning the seal of quality – the royal stamp.

But this penchant for tradition doesn’t mean KPM isn’t open to the latest trends. In fact, they now offer a Kurland coffee-to-go mug and other portable beverage cups in various designs; one of their bestsellers is a porcelain Currywurst dish that mimics the distinctly shaped cardboard used to serve Berlin’s most famous street food. Of course, the KPM dish sets itself apart not only because it is made of “white gold” – it also bears the cobalt blue scepter from Brandenburg’s electoral coat of arms. 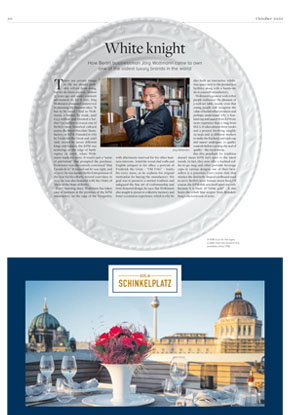