Donald Trump is relentless. He continues to
believe that Germans are hoodwinking the United States. It’s not enough that they’re swindling everyone else to maintain their high export surplus, he complains; they’re also still making Americans pay for their geopolitical security, something they’ve been doing for decades. The president insists that the burden be more fairly shouldered.

One of the issues annoying Europeans the most these days is the fact that a handful of market-dominating US companies – including Google, Apple, Facebook and Amazon, or GAFA – continue to make huge profits in a variety of ways while being subjected to virtually no controls or restrictions. Many even go so far as to call GAFA the “secret world government.” So far, legislators have allowed these companies to pay hardly any taxes on their sales and earnings generated in Germany and Europe. What’s more: they make considerable sums from their users’ data and from the content generated by creatives either by providing services free-of-charge or by stealing data and content from others, such as publishers, authors, singers, songwriters, theaters and actors, who make their living by creating content.

Europeans are increasingly insisting that revenues in this area be shared. They want to put an end to GAFA’s ability to peddle content to which they have absolutely no legal right. In other words, they want to stop these giants from keeping all of the advertising income they receive from the publication of third-party intellectual property without remunerating the owners of that property. Thus, at the end of March, the European Parliament voted 348 to 274 (with 36 abstentions) in favor of a copyright directive that would protect the rights of authors and creators. This directive was passed despite an extensive campaign carried out by companies and “activists” arguing that it would threaten freedom of expression on the internet.

The directive calls on companies to remunerate copyright holders in the future via the payment of license fees for the commercial use of their intellectual copyright on so-called social media. In other words, commercial online platforms should have to purchase the rights to user-generated content before they go on to make money with it. According to a recent article by Thomas Kirchner in the Süddeutsche Zeitung, we are seeing the emergence of “the idea of a fair internet in which monopolistic platforms will be required to share profits with authors and creators of content.”

It’s interesting to note that four-fifths of respondents in a recent survey conducted in Europe by Harris Interactive on behalf of the Creators for Europe initiative agreed with this approach. A clear majority of respondents also favored more regulation and more appropriate taxation of tech corporations such as Google (You-Tube) and Facebook.

It is safe to say that many share this opinion, including Livia Gerster, who noted the following in an op-ed in the Frankfurter Allgemeine Sonntagszeitung: “New freedoms require new rules; otherwise they will continue to be freedoms designed solely to serve the strongest.” Gerster goes on to argue that anyone who still sees the internet as a self-regulated democratic ecosphere is completely out of touch. Such people “have not yet understood that the massive power held by tech giants will pose a threat to democracy and freedom if they are not forced to undergo a process of civilization. The means to achieving this civilizing process is law.”

It is now up to the European states to transform the EU directive into national law, a process that should take no more than two years to complete. When that time comes, it would mark the start of negotiations between creators – or their collecting societies – and platforms. At that point, the era of gold-digging and uncontrolled robbery on the internet will be over. 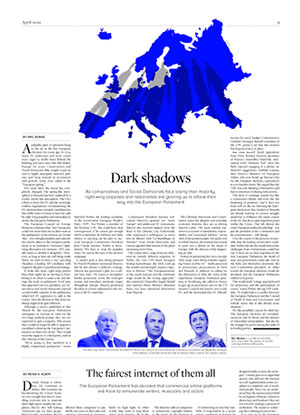