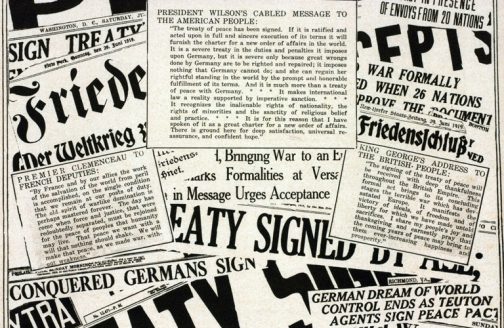 There was a certain historical irony at work on that day in December 1918, when US President Woodrow Wilson boarded the USS George Washington on his way across the Atlantic to attend the Paris Peace Conference. The steamer was, in fact, a former German passenger ship built by the German shipping company Norddeutscher Lloyd; it had been confiscated in New York at the start of World War I and had been transporting American troops to Europe since 1917. Upon arriving in the French port of Brest, President Wilson was given an enthusiastic welcome by masses of cheering people. Indeed, the US president’s journey through Europe – to Paris, London and Rome – often seemed more like a victory parade. Not only had US involvement decided the war, most people were also sure that Wilson would also bring lasting peace to Europe and the world.

The president himself was more skeptical. Already while crossing the ocean, Wilson had told an advisor that he felt the peace conference could become a “tragedy of disappointment.” And his premonition was proved right. On June 28, 1919, there was hardly anyone around to actually defend the freshly signed Treaty of Versailles and its related peace agreements. This state of affairs was even more pronounced after World War II, at which point Versailles and the international order created by the treaties of 1919-1920 were considered to embody an entirely failed peace.

Why was the international order that emerged from the treaty agreements so ill-received? Why did it remain so precarious and even prevent the world – not only Europe – from coming to rest?

Tremendously high expectations were placed on the peace agreements that followed World War I, for they were expected not only “to end all wars” but also to create an enduring, eternal peace. To be sure, every major peace treaty of the modern age – from the Peace of Westphalia of 1648 to the Congress of Vienna in 1814-1815 – has faced the challenge of ending a long war while establishing a new and stable order. However, never had there been such high and contradictory expectations attached to a peace agreement prior to 1919. These myriad expectations resulted in a level of complexity that the peace conference could not possibly address.

One key element of the pressure that weighed on peacemakers at the time was the tangible experience of the war itself; that is, the nightmare of a murderous war of mass destruction the likes of which the world had never known, a war lasting four-and-a-half years and producing millions of casualties. There were simply no role models for securing peace after a “total war” such as this. Indeed, war-marked societies were exhausted and literally bled-out, and especially in the final years of the war, they felt an enormous longing and a deep desire that the suffering and dying should come to an end.

And yet, at the same time, hatred among the wartime enemies also grew and even settled in people’s minds. This hatred had an impact on the treaty, which, for that very reason, became not a peace agreement based on reconciliation, but a continuation of war by other means.

But the problem of the peace accord and the resistance to its acceptance were not limited to the realization of peace with Germany and the specific conditions of the Treaty of Versailles. The source of criticism already aimed at the treaties by its contemporaries lay in a further perspective – one that reached beyond Germany. Indeed, the growing and increasingly shared rejection lay in the fact that the peace agreement after World War I was linked to exigencies that – strictly speaking – went far beyond those of a peace accord. These include the collapse of the multinational empires of Russia, Austria-Hungary and the Ottomans and the wave of individual nation-founding triggered by this erosion.

With regard to the question of the coexistence of different ethnicities, Wilson’s principle of people’s right to self-determination and his policy of nationalization did not provide satisfactory solutions. On the contrary, ethnic conflicts and minority issues were intensified, and the idea of the ethnically homogenous nation-state contributed to an increase in conflict and violence, that is, to wars, civil wars, pogroms and expulsions that harbored genocidal potential from the very beginning.

Efforts to establish autonomy and independence movements originating in the colonial world outside of Europe – themselves driven by the idea of people’s right to self-determination – also had an influence on the Paris negotiations. There, too, the “Wilsonian moment” (Erez Manela) was a huge disappointment; it was not the idea of national self-determination that shaped the great powers’ approach to the Paris treaties, but instead their imperial claims to power. In fact, the great powers’ colonial empires increased once again after World War I. In other words, the re-organization of the world in 1919 was determined by the powers and power-interests of the global north.

The world order established in Versailles was unstable and short-lived. It had no decisive or especially powerful supporters, a fact that contributed to its failure and thus also enabled its unraveling. This is especially true for the US, which was unwilling to use its weight and influence to maintain the very order it had helped to create. Wherever the US engaged in the constructive implementation of the peace settlements, the positive potential held by the Versailles order became apparent. Two examples are the reparations question that lingered throughout the 1920s and, not least, the German-French policy of rapprochement in the Briand-Stresemann era, which would not have been possible without Washington’s stabilization policies.

The failure of the Versailles order led to its own discrediting. In 1945, no one was interested in taking it up as a model. Indeed, World War II ended without a peace treaty. Nevertheless, the experiences associated with Versailles echoed through to the end of World War II. For example, by pursuing Germany’s unconditional surrender, the Allies had drawn on lessons learned at the end of World War I in 1918, thereby seeking to prevent a new “stab-in-the-back” myth by unequivocally demonstrating the German defeat. Against this backdrop, Versailles could no longer serve as a reference point.

This situation began to change after 1990. After the Cold War, it became easier to see that important developments – but also problems and conflict constellations of the world in the late-20th and early-21th century – can be traced back to the era at the end of World War I. This applies, for example, to the Arab-Israeli conflict, the genesis of which is closely tied to decisions made during World War I and the Paris conference, and a conflict that appears today more intractable than ever. In a similar manner, it is possible to trace back political tensions accompanying China’s recent rise to a global superpower in the Far East to developments in the years around 1919. These include the profound humiliation China experienced in 1919 in Paris, when its legitimate interests were heavily countered by Japan and the Western powers. These historical events are not at the root of today’s conflict; however, they do shape the political consciousness in China to this day.

As it did in both world wars, the US also emerged victorious from the Cold War. This victory marked the country’s third triumph in the 20th century, which has often been called “the American century” for this very reason. Indeed, expectations regarding a “Pax Americana” after 1990 corresponded to similar expectations of an American-shaped peace in 1918-1919. Similarly, after 1990, the concept of “the end of history” corresponded to the idea that World War I was the war to end all wars.

And yet, the US withdrawal from the global political structures that had been shaped to a large extent by Woodrow Wilson was a major factor in the ongoing instability and rife-with-conflict interwar international order. Indeed, a common interest among the great powers, including Germany, to share and consolidate the structures that emerged in 1919 simply did not exist. The League of Nations and other multilateral structures were thus weakened; in fact, they perished for this very reason. And the subsequent result was a massive re-nationalization of politics – in many respects, and not only in Germany – paired with an aggressive nationalism.

In today’s world, too, individual national interests and unilateral actions are increasingly determining the course of world politics. This applies to the US, where Donald Trump is taking to the extreme a development that goes back to the 1990s and destroying so much in the process, not only the trans-Atlanticism of the 20th century. It applies to China, which is confidently and aggressively asserting its global claim to power. And it also applies to Russia, which is pursuing a course of unilateralism marked by violations of international law, the clearest being its annexation of the Crimea and its interference in the Ukrainian civil war; the international community of nations has noticeably little to say about these transgressions and, above all, no common will to act. Contrary to expectations after 1990, the bodies plagued by this behavior are all those international structures and organizations that, much like the League of Nations in the 1930s, have grown weaker due to the fact that they stand in the way of such unilateral action. Europe is by no means free of the dynamics of re-nationalization that jeopardize the commonality and cohesion of the EU. And such centrifugal forces are growing. Brexit is not the only evidence of this. The narrative of peace that was constitutive of the unification of Europe in the second half of the 20th century – in connection with the experience of two world wars and the crisis-ridden interwar period – is fading and losing its effect. Germany, Europe and the world have once again become susceptible to nationalism, identitarian tendencies and a desire to achieve sovereignty via isolation. That is, they have become susceptible to those “old demons” of the post-World War I era, as French president Emmanuel Macron noted on the anniversary of the 1918 armistice. Back then, those demons managed to destroy the beginnings of a peaceful international order in the space of a few years; they also destroyed, far beyond Europe, any hopes for freedom and democracy.

Today, the reemergence of nationalism, populism and authoritarianism in Europe and the world prompts us to recall the crisis of Europe and the world in the years after 1919. At that time, a mishandled war, an unwanted peace and the profound economic crisis they caused combined to call liberal democracy into question. In many countries, authoritarian governments came to power. Indeed, after World War I, the idea of a liberal postwar order in which the victors and the defeated could live in freedom and in peace remained a short-lived illusion. 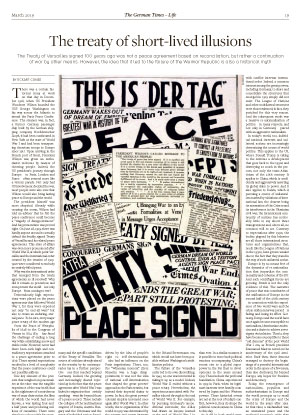