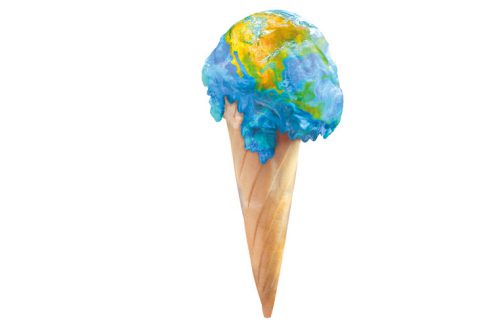 In 2010, The Washington Post ran a Tom Toles cartoon that regrettably seems to become more and more relevant from year to year. The cartoon depicts researchers in 2060 still searching for a breakthrough technology to solve climate change; what they’ve come up with is a time machine to take the scientists 50 years back to the point in time when humanity should have put a price on CO2. From the perspective of many experts, this is pretty much the answer to the question surrounding groundbreaking climate- protection technologies: in principle, all the necessary hightech has long since been available; we now must finally generate the political will to make sure it actually gets used.

For example, the use of energy derived from wind, sun, water, biomass and other renewable sources would have to be expanded more quickly. A recent report issued by the Ren21 network showed that renewables already account for more than one quarter of the electricity consumed in 2018. In addition, renewable energy is often the most affordable option for generating electricity; it’s cheaper than coal or gas. “This is good news, but it’s not perfect,” says Rana Adib, secretary general of the network, which is supported by the UN’s environmental program and brings together international experts from science, government, industry and NGOs.

In other words, the transition to green energy is progressing too slowly, and this snail’s pace is due to political policy. “Renewable energies often compete against subsidized fossil fuels,” says Adib. According to the Ren21 report, much more money is still being spent on subsidizing coal, oil and gas than on support for green energy.

In addition, the vast majority of countries are fostering renewables solely in the production of electricity, even though more than 80 percent of the energy that is consumed is used for heating, cooling and transport; in those areas, however, renewables are not making any headway.

This is also the case in Germany, where the much-heralded Energiewende, or energy transformation, has thus far primarily been a transformation in electricity. While the share of renewables in the production of electricity has consistently increased over the years, nothing much is happening in other areas: buildings are only slowly being insulated as the associated tax incentives have not yet been decided; three-fourths of residential buildings are still heated with oil or gas; heat pumps that harvest heat from their surrounding environment remain rare; and transport continues to emit as much CO2 as it did in 1990.

However, countries like Denmark prove that things can work differently. More than half of the electricity there comes from wind turbines and solar cells – facilities that only deliver energy when the wind blows or the sun shines. No other country in the world has such a high proportion, and this is made possible for two reasons:

First, Denmark has a broad and highly advanced system of networks, with high-performance power lines to neighboring countries Germany, Norway and Sweden, thus ensuring that electricity can be either exported or imported, depending on supply.

Second, Denmark has long since combined electricity and heat. They have very flexible and efficient power plants that produce electricity and heat energy, for example from biogas. If the windmills aren’t turning, these plants step in. Excess electricity is sometimes also used to heat water that is then pumped via district heating networks to homes for use in their own heating.

Another way of making use of excess wind power is called Power-to-X, where “X” stands for gas or liquid. This technology has been around for some time and uses electricity to split water into hydrogen and oxygen. Together with CO2 from the air or from industrial plants, it can be used to produce chemically synthesized methane (gas) or gasoline, kerosene and diesel (liquid). Although quite a bit of energy is lost in the process, these fuels can be used in, for example, aircraft or trucks, which will not – at least in the foreseeable future – be powered by electricity.

This artificial gas can even be converted back into electricity; however, this also leads to even higher losses. Still, it’s currently the only option we have for storing large amounts of electricity over a long period of time; that is, for the moment when the last conventional power plants are shut down.

Experts agree that this technology will be needed at some point in the future – the only thing not clear is exactly how we get there. The plants are still expensive, and they’re only worth setting up if there’s a large amount of green electricity that nobody else is using. “For the coming years, Power-to-X won’t be feasible in Germany, because the excess electricity accrued from renewables won’t be available until well into the 2030s,” says Matthias Deutsch from the Agora Energiewende think tank. Until then, the state will have to foster the technology – and, above all, make sure that it becomes more affordable.

“The question is whether we get this done via research and development or by widespread use,” says Deutsch, who thinks things won’t work without the latter. The situation is similar to that of photovoltaics, which became affordable only after countless roofs in Germany were equipped with solar cells through state funding. But one thing is certain, he says: “Someone will have to carry the learning costs.” That is, the more countries get involved, the cheaper it will be.

In other words, the technology required to transform the energy system away from fossil fuels is already here; we just have to expand renewables, strengthen the networks, bring together sectors such as electricity and heat, and set up Power-to-X plants over the long term. None of this technology need be invented. And yet, this alone will not be enough to meet the Paris climate goals or avert the worst-case scenario; the world has simply dragged its feet for too long with regard to the energy transformation.

People like Peter Viebahn are thinking about the consequences of this behavior. Viebahn is responsible for technology at the Wuppertal Institute for Climate, Environment and Energy. “At this point, almost all climate scientists assume we are going to need negative emissions, perhaps even well before 2050,” he says. What he is referring to are technologies that allow us to filter already emitted CO2 out of the air and store it in the ground, if possible, forever.

There are two promising options for doing this. One is called bio-energy with carbon capture and storage, or BECCS. It involves harvesting energy plants that absorb CO2 from the air during their growth phase; after that, the energy is stored and used, for example, by burning the plants or fermenting them into biofuels like Ethanol. The CO2 released in the process is captured and stored – that is, withdrawn from the atmosphere. This variant is technically feasible but has strict limits; its biggest obstacle is the need for large areas of agrarian land, which would mean that the land could not be used to feed the world’s growing population.

For this reason, many researchers are setting their hopes on a second option called direct air capture (DAC). This involves devices that remove CO2 from the air. A number of companies are developing machines to do just that, including a Canadian firm called Carbon Engineering. The largest facility so far is operated by a startup called Climeworks near Zurich in Switzerland, which can filter 900 tons of CO2 from the air in one year.

Although that amounts to the total annual emissions of 100 Germans, it’s a start. But again, the biggest problem is the price tag: It currently costs at least $600 to extract one ton of CO2 from the air. According to the founders of Climeworks, they will be able to lower that price to $100, but it will require a lot of work and a lot of money.

Viebahn continues to think that the problem is not the technology, arguing that the plants just need to be improved and expanded: “The real challenge is a political, ecological and social one,” he says. The questions in need of answers include who will build these plants, who will pay for them, where should they be built, and where should we store the recovered CO2?

Such answers would be easier to find if the world could agree on a price for CO2 and had a clear plan to address the climate crisis. If and when we find these answers are open questions. In the meantime, the only technology we need to focus on is that cartoon time machine. 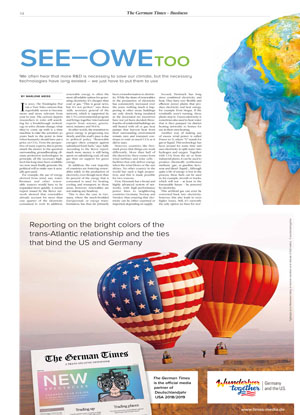